Jessie Cave’s show Sunrise is a masterpiece in modern, relatable comedy. You may know Jessie from her role in Harry Potter, her appearances in panel-shows or from her charismatic doodles which she shares on Twitter and Instagram. Having recently completed a sold-out run at Edinburgh Fringe, Jessie is now performing her show in London’s Soho Theatre before taking it on tour. Admittedly this may not be the slickest performance but tackling issues around love, dating, motherhood, assault and everything in between in a short 60 minute show is a feat in and of itself – and it’s in the rough-around-the-edges elements that the show finds its strength.

Sunrise is based on the premise of ‘sunrise women’ who get up at 4am (as, or before, the sun rises) to get ahead of everyone else, using this time to do yoga, admin and emails before starting their day officially at 6am. Jessie admits that she decided to do this with somewhat limited success. The show is also fundamentally based around her recent break-up with Alfie Brown, a comedian and also the father of her two young children. In this bare and honest performance Jessie is enchanting as a storyteller. The show features a few hiccups (which, having been lucky enough to see it twice, I have a hunch may not be all that accidental) and Cave does not seem completely comfortable in the spotlight, but these elements only further add to the delight of the show as they win the audience over. We’re there because we like Jessie, we relate with her and we’re on her side as she mucks up a line or is distracted by an audience member leaving for the toilet.

Exploring her break-up and its fall out, Jessie considers issues around dating as a young and single mum. When should she tell her new, younger, boyfriend that she only has a few hours with him before she needs to get home to her kids? She also details her quirks that her fans have grown to know and love, such as: when should she tell her date that she’s a vegan? Or is that simply obviously from how she’s dressed? (The audience laughter at this point suggests that the answer is probably yes). One of my favourite bits is Jessie’s admission that she doesn’t like “any films or music”, warning her date not to ask her about this or try to convince her otherwise. It’s these kind of quirks and off-hand remarks that make Cave a unique performer with a distinctive voice – the kind of voice we’re acquainted with through her doodles . 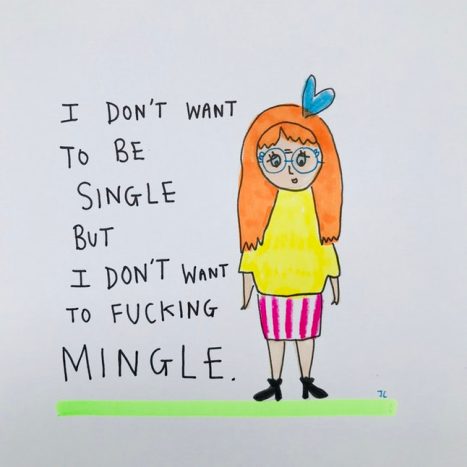 Being somewhat of an outsider is kind of part of Jessie Cave’s brand now, and this is never more evident than in her anecdote about attending an event at the Southbank for International Day of Girl – where Cave feels intimidated by the ‘sunrise women’ and doubts her own ability to influence or inspire the teenage girls she’s tasked with meeting. Cave then turns this sense of uncomfortableness on the audience, asking them “Who here has slept with Alfie Brown?” to an awkward silence littered with giggles.

Styled with her signature plaits, polka-dot top and standing in a giant bed/cage (which she apparently sleeps in every night with her two children) Cave places herself at the heart of this show. This isn’t observational comedy, she’s not really remarking that much on others, but instead exploring her own experiences through a simultaneously comedic and relatable lens. Using pillows and a backdrop, both created by her mum, as props through which she voices the two other male ‘characters’ in the story Jessie is able to weave together different elements of her life. Addressing her Harry Potter fame, her career as an artist and her past experiences with assault Cave threads together what we know and expect about her with honest accounts of her personal life.

At times blistering intimate, this show is truly something special in its ability to be heart-warming, awkward and endearing.

The current run is sold-out but catch it again in March or on tour early next year. Tickets and info here and here.