Isn’t He Lovely: Harry Styles Live at The 02. 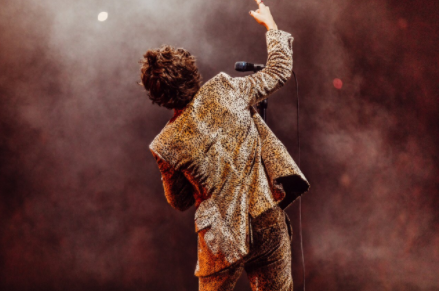 All the world’s a stage, and all the men and women merely players. Except for Harry Styles; Harry Styles is king of the stage. Launching to international super-stardom about 8 years ago, Styles has literally grown up on the world stage and for those of us familiar with One Direction’s old touring schedule (hello 4 tours in 4 years) it’s no surprise that he’s completely at ease performing to a near-sold-out O2 Arena. This is clearly where Harry belongs, and man does he know how to put on a show.

Admittedly, it isn’t hard for Harry to please his fans. The O2 was packed to the brim with young women who undoubtedly spent their adolescence eagerly awaiting the latest 1D release. The room was brimming with anticipation and exhilaration, with deafening screams at even the dimming of the lights. Harry knows he has a lot to live up to. He admitted himself that he only has one solo album, and even that is sitting pretty at a neat 10 songs, not exactly the back catalogue to be expected for a run of this size. But, fundamentally he respects his fans, he understands what they’re here for and the support they have to offer him. He doesn’t belittle his years in the biggest British boy-band (here’s looking at you Zayn), he doesn’t mock his fans for being unashamed fan-girls. He treated us all to some great covers of vintage 1D songs: ‘Stockholm Syndrome’, ‘If I Could Fly’ and ‘What Makes You Beautiful’, which really pleased my 17-year-old heart. Not only did he perform for the fans, but he was so grateful for their company, thanking everyone for coming, saying he couldn’t do it without us and that our only job for the night was to enjoy ourselves and be who we wanted to be in that room. He encouraged singing and dancing and “giving your neighbour a cuddle”. What a sweet creature.

Confidently manning the stage with his guitar and kitted out head-to-toe in leopard print, Harry worked his way through the 10 songs from his self-titled debut as well as the aforementioned One Direction covers. He also played a version of ‘Just A Little Bit Of Your Heart’, a song he originally wrote for Ariana Grande (a real treat for the mega fans who spent hours trawling Youtube finding unreleased Harry demos, not that I would know anything about that…). Harry perfectly meshed his earlier pop days with his newer rock inspired direction, reworking ‘What Makes You Beautiful’ into a heavier guitar-based number. Coming from a 5 (and then briefly a 4) piece there may have been some trepidation about Styles’ ability to pull off a solo show, but with the support of his band – including the incredible Sarah Jones on drums (@sarahsausages) – he was a front-man, plain and simple. 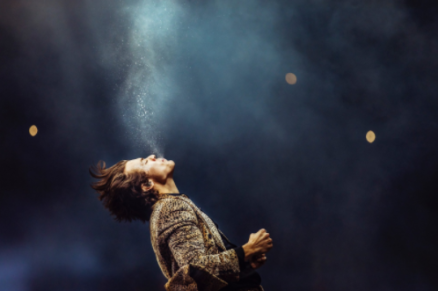 For years there has been speculation about Harry’s sexuality, from fan fictions to friendship-ruining rumours, and I have the utmost respect for the class and delicacy with which Harry has dealt with this. In his unreleased single ‘Medicine’, which he is performing on this tour, he makes reference to ‘messing around with boys and girls’, hinting at his oft-suspected bisexuality. Whilst there was never any need for Harry to address this issue, his attitude towards it leads to the creation a fully inclusive night, from fans lighting up the room with pre-planned rainbow lights to teenage girls waving rainbow flags and Mr Styles himself draping the flag over himself and dancing about.

Harry Styles live at the O2 was a night of pure glee, for him and for his fans. It was so wonderful to be in a room where liking pop music and having a crush on a cheeky northern boy with a guitar were not only respected but celebrated. There was no room for boring, straight-male cynicism in this evening of teenage celebration, everyone was just there to have a good time.