Welcome to PYT, a new column talking you through some of the most exciting young talent in the music scene. This series will celebrate some of the amazing young women doing their thing, and smashing it in the process. PYT is often synonymous with ‘Pretty Young Thing’ (if it doesn’t get Michael Jackson’s song in your head just reading those words you’re a stronger person than I am) but I’m happy to be redefining it here. Fuck the patronising compliment ‘Pretty Young Thing’ and celebrate the Powerful, Young and Talented gals who are starting to run the scene. 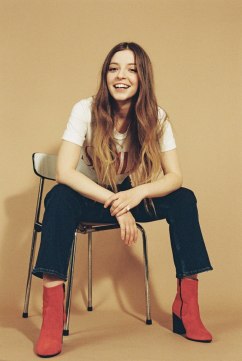 This week’s PYT is Jade Bird, a singer-songwriter who has been turning industry heads for the last year or so. In 2017 she released her debut EP ‘Something American’ to critical acclaim and has recently been riding the success of her single ‘Lottery’. Rolling Stone called her voice ‘raw and robust’ and she was on the BBC Sound Of Longlist this year.

Jade starting writing songs as a young teen, channelling her devastation at her parents’ divorce into music. The result of that is a surprisingly mature (and occasionally sombre) sound with emotionally complex lyrics. There are always going to be a lot of singer-songwriters trying to break into the music business; the simple (which does not, of course, equate to easy) nature of singing with a guitar means that a lot of people do it. Jade, however, rises about her contemporaries with a combination of personality and presence, both physically and vocally. There is a throaty, scratchy tone to her voice that comes out when she belts which is a startling contradiction to her soft folky timbre when she takes it down a notch, both equally as great as eachother.

I saw Jade Bird live last week at Shoreditch’s Village underground (a lovely venue, by the way).  She walked on to the stage in an all-white suit, a white guitar and her ridiculously long and shiny hair down so that she looked like an Americana Angel. She may have seemed suave and sophisticated (I’m considering wearing nothing by white suits from now on) but Jade’s stage-manner was anything but, in the best way. She is completely goofy, amazingly relatable and seemed so grateful that people had turned up to watch her sing.

After every song she did this little laugh that we’ve all done; that ‘I can’t believe this is happening but I’m just going to roll with it’ laugh. It was very endearing and got the crowd on side straight away, no mean feat seeing as she was playing to a sold out 700 capacity venue. Her live show was impressive and obviously well planned; her white suit stood out against a constantly- changing background of different palettes and the set list varied between loud and proud and the emotional hard-hitters.

Jade played all of her excellent ‘Something American’ EP released last year, as well as a couple of choice covers to keep thing fresh; Kate Bush’s ‘Running Up That Hill’ on the piano was a particular highlight. While fan-faves ‘Lottery’ and ‘Cathedral’ are amazing, I found myself transfixed by the devastating ‘What Am I Here For’ and ‘If I Die’, which are perfect for when you’re feeling a bit sorry for yourself.  We’ve all laid in a dark room and imagined our own funeral, wondering who would come and who would cry, right? Well next time you do that, stick ‘If I Die’ on and ride that sympathy wave, babe.

Don’t let the angelic white outfit and petite frame fool you: Jade Bird has a powerful voice and a really strong presence. After a couple of months, she has me wrapped around her little finger, and she has been turning all sorts of heads (Zach Braff tweeted that he was a fan recently). I’d recommend that you listen to ‘Something American’, and book a ticket to see her the next time she’s in town. In the meantime, give her a follow on social media (her Instagram stories are hilarious) and book in some time with this PYT.

Listen to: What Am I Here For, Lottery, Cathedral